Pennsylvania was established as a colony in 1681 when the territory was granted to William Penn by King Charles II, of England. Penn, a Quaker with a strong sense of justice, then purchased the land from the native indians. Chester County was founded in 1682, as one of the three original counties in Pennsylvania, along with Philadelphia and Bucks Counties. The name Chester probably suggested by friend of Penn's, Robert Pearson, because it had been the city in England where Pearson resided. Before European settlement, Indians of the Lenni Lenapes tribe were found in the County, but were rapidly displaced by the influx of settlers.

One of the first purchasers of land from Penn was Lancelot Fallowfield. In 1718, a preacher named John Salkield brought a tract of land from Fallowfield. The land extended west from what is now West Bradford Township to the Octorara Creek, and included the area between Upper Oxford and West Caln Townships. Salkield decided to call his land Fallowfield, in honor of its former landowner. Land boundaries were redefined in 1728, when Sadsbury was taken out of the original tract. The courts were unsuccessfully petitioned in 1731 and 1738 to further redefine the tract, but the matter was not accomplished until 1743. The division was along the North Brand of Doe Run, now known as Buck Run, with land west of the creek eventually forming Highland and West Fallowfield Townships. A portion of West Marlborough was subsequently added to the area that had become known as East Fallowfield.

East Fallowfield Township grew slowly, but increases in population were steady. For example, there were three taxable residents in 1718, and thirty six in 1753. The first iron mill in America is said to have been established along Buck Run by Issac Pennack, in 1793, at Rokeby. In 1811, the population was sufficient to warrant the building of the Friends meeting House, which still exists after several renovations. By 1826, there were still no villages in East Fallowfield Township that were larger than several houses, and Coatesville was only a tiny cluster of houses. Soon after the advent of the locomotive, railroads were extended from Philadelphia, as far west as Parkesburg, by 1831. As rail traffic increased, villages along its route grew, and the Coatesville area quickly became a prominent population center, while East Fallowfield Township, continued to grow at a slower rate. The need for education became an increasing concern, and in 1851, the Ercildoun Academy was founded as a school for boys. In 1854, the school began functioning as a girls seminary, and became noteworthy as one of Chester County's institutions of higher learning.

Throughout the 1800's, East Fallowfield Township continued to develop along the lines of rural agricultural area. With slavery becoming an increasingly sensitive issue, rural residents in the Chester County area found themselves in a demanding situation. Since Pennsylvania was a free state bordering on the slave state of Maryland, the southern Pennsylvania counties were an initial stop for slaves seeking freedom. When the Fugitive Slave Law was passed in 1850, harboring slaves became dangerous, but the "Underground Railroad" remained active in the area. Ercildoun was a link in the Underground Railroad, and it residents were quite involved in the abolition cause. When the Civil War broke out, East Fallowfield Township was active in recruitment for the United States Army.

In 1877, an event took place which achieved a degree of infamy in the area. On April first of that year, a freak storm developed into a tornado that touched down in the Chester Valley. The storm caused particularly heavy damage in Ercildoun, where fourteen buildings were destroyed. Restoration efforts were quickly undertaken, and by 1879, there was no visible evidence of damage. 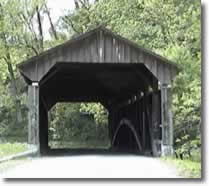 Coatesville continued to outpace the growth rate of population center in the vicinity. This caused a great deal of influence on East Fallowfield Township, particularly toward its northern boundary. in 1921, the Boroughs of South Coatesville and Modena were formed from land formerly under Township jurisdiction. The Coatesville area attracted industry and business, while the Township remained more of an agricultural center.

Today, East Fallowfield Township exists as a semi-rural municipality, highlighted by development clusters. The northern sections of the Township show considerable amounts of residential development, while the majority of the southern properties are devoted to livestock farms and horse stables. History becomes an important consideration in understanding the Township as it currently exists. The past may help illustrate why the Township has evolved to its current state, as well as offer an insight into events contributing to its character.

An appreciation for local history can be developed with a quick drive around the Township. There are a number of historical sites in the Township that add a flavor of bygone days to the area. The Speakman Bridge No. 1 spans Buck Run Creek on the road from Rokeby to Youngsburg. The bridge, which is recognized by the Pennsylvania Register of Historical Sites, was built in 1881, at a cost of $1,918. The Speakman Bridge No. 2 and the Hayes-Clark Bridge make up the twin bridges, which are located in the King Ranch. The Fallowfield Octagonal House which is listed on the State and National Register of Historical Sites, in a unique, eight sided structure built in 1856 along Wilmington Road. Other areas of interest include the Friends Meeting House and the Burying Ground in Ercildoun, along with a host of sites that are actively functioning. Old farmhouses and barns that are common throughout the Township and County will probably be considered with more interest as soon as there are fewer of them around. Adequate consideration should be employed when dealing with any area that has potential value as a historical site.

Note: The office lobby will be closed to the public on Fridays through Labor Day

However, visitors can still use the outside drop box or contact us by phone

©2015, all rights reserved East Fallowfield Township
website by Fairview Design
Back to Top